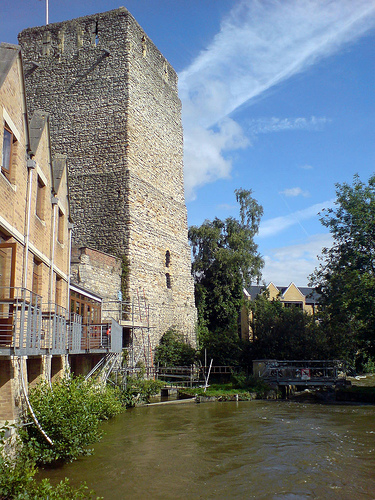 The Oxford Jewish Heritage Committee erected an interpretation board in Oxford Castle. The board gives a brief overview of the history of Medieval Jewish Oxford and outline the important relationship between the Jewish community and the Castle as follows:
The Jews of Medieval Oxford
William the Conqueror brought the Jews to England from France to facilitate trade between his new kingdom and his continental territories. The Jews migrated up the Thames to Oxford sometime after 1075, and established a significant community in the town. The Jewish quarter was located around today’s St. Aldate’s, which became known as Great Jewry. Before long the community numbered between 200 and 400 members. As non-Christians, Jews were not subjects of the realm but were wards of the Crown and therefore under royal protection. The King could turn to the Jews as his own private source of income and would tax them heavily for specific projects e.g. the construction of Westminster Abbey, funding wars or crusades.

Beaumont Palace: Oxford had a uniquely strong royal presence as it was surrounded by five royal estates, Oxford Castle, Beaumont Palace, Woodstock Hunting Lodge and Wychwood and Shotover royal forests. This provided a circle of royal protection for the Jews. 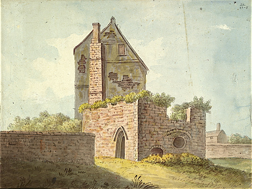 Oxford Castle and the Jews

The relationship of the Jewry with Oxford Castle was threefold. It provided refuge and protection when outbreaks of anti-Semitic violence threatened the Jewish community. Although Oxford suffered less from this sort of violence than most other English Jewries, the local community sought refuge in the Castle on several occasions. Secondly, it was a place of detention. As the 13th century progressed, increasing financial and occupational restrictions were placed on the Jewish community making it hard to earn a living. As a consequence a few Jews were detained in the Castle for the specific crimes of tax arrears and coin-clipping. Thirdly, Oxford Castle was the location of the Jewish Archa Chest.

Jewish Professions and the Archa Chest

Before explaining the role of the Archa Chest, it is important to understand the type of work carried out by members of Oxford’s medieval Jewish community. The Jews were barred from any profession for which a Christian oath was required, usually by their guilds. Unable to own and farm land, England’s largely urban Jews therefore were restricted to working as landlords, shopkeepers and particularly money-lenders (a profession forbidden to Christians). Thus money-lending became one of the few occupations left to the Jews, and they lent heavily to Christians who mortgaged entire properties into bond. 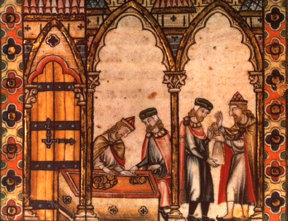 To keep track of contracts between Jews and Christians, a large chest called an Archa, was placed in the castles of English towns with large Jewish communities, including Oxford. Each chest had 4 locks, two keys being held by Jews and two by Christians. Bonds exchanged between Jews and Christians were known as starrs (anglicised plural of the Hebrew word שטר shetar, meaning contract). Two copies of a contract were made. One was placed in the Archa and the other kept by the debtor. The bonds were written in Latin often with added translations into Hebrew.

Each Jewish money-lender had a distinctive wax seal and two medieval Oxford Jews’ seals survive. Mildegod, a woman financier, lived next to the Synagogue on Great Jewry (now St. Aldate’s). Her seal was a pheasant or peacock with a lizard in its mouth. 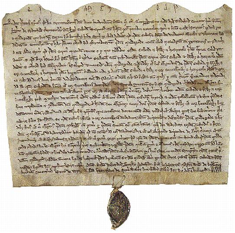 Images are the copyright of the President and Fellows of Magdalen College, Oxford

The second seal belonged to Jacob, son of Master Moses who was a great Oxford landlord; his seal was a lion rampant. 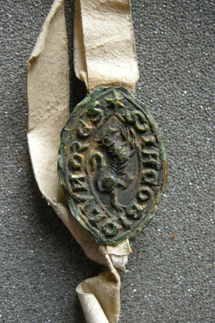 Tally sticks, through a series of notches, recorded tax payments and were snapped in two, lengthwise, with each party keeping one half as a record. Royal taxes levied upon the King’s Jews were called tallages and the King’s half of the tally stick collected from the Jews at Oxford Castle would have been sent to the Exchequer in London.

From 1272 onwards Edward I systematically curtailed Jewish economic activities even further leading to community-wide impoverishment. Bowing to political pressures and with the Jews no longer of any financial value to the king, Edward I expelled the Jews from England in 1290. They were not permitted to return to England for another 366 years.

The New Oxford Castle Board
In October 2010 a new interpretation board about the part played by the Jews in the Castle’s history was unveiled.  See  News