The Robert of Reading Plaque

A plaque which commemorates the martyrdom of Robert of Reading is fixed to a decaying wall, part of the old Osney Abbey in the grounds of Osney Marina at the far end of Mill Street, Oxford.  This plaque was one of a set erected in 1931 by the Oxford City Council and extracts from the articles in the Oxford Mail and Times of 1931 are reproduced elsewhere on this site.

The story behind the plaque is that at a time when anti-Jewish feeling was at its height, a young Christian Deacon, a student of Hebrew at Oxford University, decided to become a Jew. He had himself circumcised and married a Jewess. When asked by the Church authorities to account for his conduct, he is reported to have said: “I renounce the new-fangled Law and the comments of Jesus, the false prophet”. His outspokenness cost him his life and he was burnt alive for heresy. His courageous stand and his suffering are commemorated on the plaque.

This story is well described in Volume 1 of The Collected Papers of Frederic Maitland (1911) held by the Online Library of Liberty under the title “The Deacon and the Jewess“. This nameless convert is often confused with another, Robert of Reading, who also converted in the 1270s and took the name ‘Haggai’ but details of his fate are unknown. See also Abrahams and Maitland ‘The Deacon and the Jewess’ in the Transactions of the Jewish Historical Society, vol 16 (1908-1910) pp. 254-276 for a discussion of the distinctions Robert -v- the Unknown Deacon. Cecil Roth in his History of the Jews in England (1941) pp76, 83 also discusses this issue.

In The New Standard Jewish Encyclopedia 1977 by Roth, Robert of Reading (c.1275), is described as: an English convert to Judaism. A Dominican friar, he was stimulated by his study of the Bible to adopt the Jewish religion, under the name Haggai, and subsequently married a Jewess. So far as is known, he did not suffer in consequence, though some chroniclers seem to suggest that the episode was partially responsible for the expulsion of the Jews in 1290. He is often confused with an anonymous Oxford deacon who converted to Judaism and was burned in 1222. C.R. (Cecil Roth)

A picture postcard well over 100 years old, shows the same archway which is a fragment of a building, the only remaining trace of the fifteenth century Mill buildings attached to the twelth century Osney Abbey.

Osney Abbey was founded by the nephew of the man responsible for Oxford Castle and is almost completely derelict. It and the few remaining pieces of the ancient Mill are registered historic monuments, shown on p 233 of the At Risk Register of English Heritage with the following comment attached:  “Only surviving building of Augustinian Priory, founded 1129. Rubble and timber framed building, probably C15, with C16 roof. Attached wall with C15 archway. Used as a storeroom. Adjacent and adjoining buildings in poor structural condition, with danger signs. Currently included in discussions over the wider Osney Mill site.”
The area around the ruins are now part of Osney Marina and the site is under development. There is only one brief mention of the 1931 Plaque in an Appendix to the planning application, shown here. 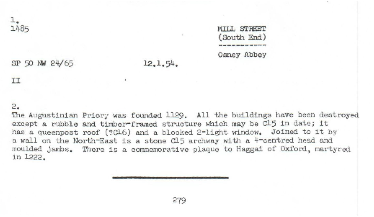 The Proposal does clearly state that there will be “Repair and alteration of scheduled monument building associated with  Osney Abbey and use as office accommodation. The position of the Scheduled Ancient Monument (SAM) is clearly shown  in the ‘existing’ and ‘proposed’ plans. The current position of the plaque is on the north east outer wall of the SAM, but it is not shown on the plan or any of the elevations drawings. It is hoped that there will be some, albeit limited, public access to the newly developed site to view the SAM and plaque.

As at May 2012, the development is almost complete with significant improvements to the state of the plaque and the remains of the Mill Building.   Permission has recently been granted by the Oxford’s Diocesan Committee to permit erection of an information board near the site of the original Osney Abbey some yards to the east in the area now occupied by Osney Cemetery.  It is hoped to have this completed by the end of 2012.