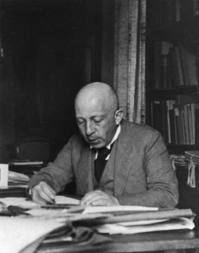 Archaeologist Paul Jacobsthal fled Nazi Germany in 1935 and came to Oxford with his wife during the Second World War. A leading world expert in Celtic Art, Jacobsthal’s views were increasingly regarded as subversive in Nazi Germany. The entire study of archaeology had become highly politicized and evidence of the pan-European origins of Celtic Art did not fit with the regime’s nationalistic doctrines. As Nazi power grew, and life became too dangerous, Jacobsthal and his wife sought refuge in Oxford, with the help of the archaeologist Sir John Beazley. In 1937, he took up a post at Christ Church College, a position he held until his death in 1957.

Even after he fled Germany, many of his former colleagues continued to write to him with information and support for his research, in direct defiance of the Nazi regime. Jacobsthal’s work made a lasting impact in the area of European cultural identity. He was crucial in establishing the first ever professorship for prehistory in Germany, recognizing its importance as a separate discipline: it would not be going too far to say he was the father of modern German prehistoric studies.

Soon after arriving in England, he began to study Celtic art and in 1944 published his ground-breaking work, Early Celtic Art, an astonishing achievement of intellectual scholarship and collaboration, which remains the benchmark volume in its field. It laid the foundation for all subsequent European scholarship on Celtic art, and made an important new contribution to ideas of a pan-European heritage which became so vital in the rethinking of national identities in the post-war period.

Although Jacobsthal was invited to return to Germany after WWII, he felt he could not go back to a University which had retained a Nazi on its staff. Instead, he remained in Oxford, where he continued to build scholarly bridges between British and German archaeologists.

As well as his professional papers, Jacobsthal also left a stack of personal letters that reveal his and his wife’s experiences as wartime refugees in Oxford, which was not always easy. In one letter to a friend in 1946, Professor Jacobsthal wrote: ‘England is very, very different to how guidebook writers present it…that life between the nations as we lead it is not easy, is evident and the contact with friends, which is possible now, illuminates these difficulties even more.’

NB: An exhibition at Oxford University in January 2012 contained information from Professor Jacobsthal’s own archive of his wartime and refugee experiences. It also collected oral histories from volunteers who come forward with their own memories of the period.

As well as the exhibition, the project will make Professor Jacobsthal’s letters available to the public digitally. They will be catalogued, digitized, and made available on the web from 2011 at www.arch.ox.ac.uk/jacobsthal.

Life between the Nations: A war-time refugee story’, was at the Museum of Oxford from 15th January to 10th March 2012