The Jews first came to England from William the Conqueror’s Norman capital of Rouen.

Excluded from the trade guilds, but highly literate and numerate, they were financiers and immensely important the Norman economy. Their role was to lend money at interest, something which Christians at the time were not allowed to do by the Church, and to finance the King’s projects. They were under the direct protection of the King and the King received one third of the estate of each Jew who died. The Oxford community is thought to date back to 1075.

Both William the Conqueror and his sons William Rufus and Henry I had great respect for the Jews, who prospered during their reigns. Unfortunately, Henry I’s daughter Matilda engaged in 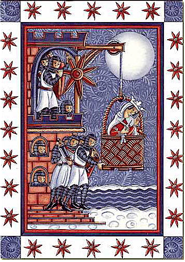 the house of a local Jew called Aaron and threatened to do the same to the rest of the community unless they paid up. Henry II, who succeeded Stephen, found that the country’s finances were in disarray because there was no reliable system of record-keeping, so he set up a centralized Special Exchequer to keep track of all financial activities. His son, Richard ‘the Lionheart’ transformed this into the ‘Jewish Exchequer’. All transactions were written on rolls of parchment and kept in chests in 25 English towns, including Oxford. These chests were called ‘archae’ and each had four keys, two kept by Christians and two by Jews. If Jews did not put copies of their transactions into the archa, they were fined. The Oxford archa was kept at Oxford Castle.

Oxford Castle was a royal castle and hence both a place of protection for the Jews and the royal tax point. The Jewish 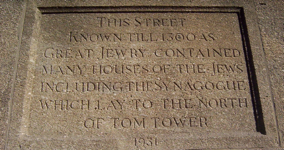 quarter of the city of Oxford was not far from the castle, on the street which is today called St Aldates. In the 12th and 13th Centuries it was called Old Jewry and a plaque on the side of the current town hall attests to this fact.

For the most part, the Jews in Oxford prospered until 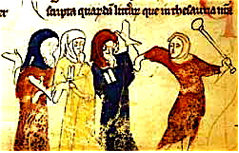 the reigns of King Richard and King John. There were anti-Jewish riots in London at King Richard’s coronation, but these did not directly affect the Jews of Oxford. However, when King Richard was kidnapped, the Jews from across England had to pay ‘the Northampton donum’, a vast sum of money to buy his freedom. The first real tallage (or impromptu tax) was that exacted by King John in 1210 after he lost his battles with France and bankrupted England.

His son, Henry III, inherited his father’s financial mess and because he needed to placate the barons (who at one stage imprisoned both him and his son, the future King Edward I) he frequently ‘forgave’ the debts owed by high-ranking debtors, thus impoverishing the Jews. In its most prosperous period, the Jewish community of Oxford would still only have numbered around 200 people, though it must also be remembered that the population of Oxford was itself only around 5,000.

In the 13th century, life became tough for England’s Jews and in Oxford there were a number of riots and a lot of legislation which made it difficult for them to continue their business. The Catholic Church’s fourth Lateran Council of 1215 decreed that Jews should wear a distinguishing symbol, usually yellow tablets of the law, and the Council in Oxford decided that locally this should take the shape of a yellow star. In 1222 a deacon who had married a Jewess and converted to Judaism was burned at the stake at Osney. In 1244 the students rioted and burned several Jewish houses. Prince Edward, together with the Chancellor Walter de Merton, took control of administering the Jewish Exchequer and fixed a very high interest rate (which had previously been variable, dependent on the perceived risk of the transaction). He also made it illegal for Jews to secure loans against property i.e. to mortgage and also to buy property which they did not live in. He also outlawed ‘usury’ (lending at interest) and told the Jews to engage in agriculture and crafts, difficult for those with no experience or contacts. 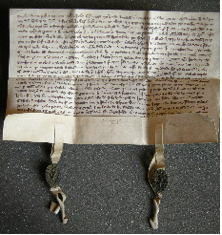 In 1268 the entire Oxford Jewish community was briefly imprisoned because one of their number had supposedly broken the crucifix being carried in Oxford’s Ascension Day parade. As a result, the Jews had to pay for the erection of a stone crucifix near Merton College. (The base of this crucifix is thought to reside currently in the Museum of Oxford). Many of the Jews left England because they were unable to continue their business and it was around this time (in 1264) that Jacob of Oxford sold two buildings to Walter de Merton for the establishment of Merton College. (The original documents detailing this transaction still exist in Merton’s Muniment Tower). Queen Eleanor of Castile, Edward I’s wife, claimed the entire estate of Jacob of Oxford, the most important Jewish financier of the mid-13th century.

The quarter’s synagogue was located on the site of what is today the left-hand tower of the college of Christ Church fronting onto St Aldate’s. The Jews’ houses were usually long and thin, with small frontages onto the streets and deep cellars where money and other items were kept. They were made of stone, in contrast to the largely wooden or wattle

and daub houses of the rest of the population. This was for security but also because stone houses were typical of Normandy from whence they had come.

The Jewish cemetery was outside the city, as prescribed by both Jewish and Christian law. It was initially on the site of today’s Magdalen College, but subsequently moved across the road to what is now the Oxford Botanic Garden. It is thought to have existed from 1177 to 1290. Prior to 1177, Jews were not allowed to bury their dead outside London, so all bodies had to be transported after their death.

In 1290, Edward I issued a decree of expulsion and the first wholesale expulsion in history of an entire Jewish population took place. By this time, thanks to the punitive measures already imposed by the King, there were very few Jews left in Oxford. Those who stayed were mainly elderly widows and they probably converted as they disappear from the sources, having had their names changed to Christian names.

The last mention of an Oxford Jew is from Paris a few years after the English expulsion, though he and his contemporaries were also to disappear, when they were expelled from France in 1306. The Jews were allowed to leave

with their chattels only, so any outstanding property was confiscated.

Much of it went to the Bishop of Wells and subsequently became the property of Balliol College. Both Balliol and Magdalen Colleges have 13th century deeds from formerly Jewish houses in their library collections complete with their original seals.

For further reading about the Medieval period see the following articles on this site:

The Dictionary of National Biography