The Oxford Jewish Heritage Committee is grateful to two members of the OJC who have made us aware of some entries in the 1861 England Census for Oxford City that might be of interest;

The current position of the house at 29 Cornmarket St in 1861 which no longer exists.

It was then attached to St Michaels Church and was on the corner of Cornmarket and Ship Street.

The first is Schedule no:69 for 29 Cornmarket Street where the Solomon Family lived, and worked.    The family at the time of the Census consists of:

·      Lewis Solomon, the head of the household, aged 32 whose occupation is given as Jeweller and Watchmaker, born in Germany, but a naturalized British subject.
·      Diana Solomon, his wife, aged 31, born in Whitechapel, London
·      Their four children;  Matilda, aged 9, Levi, aged 8, Joseph, aged 5 and Harriett, aged 3; all born in Oxford
·      Ann Powell, their unmarried servant, 16, born in Bicester.

Following publication of a brief version of this article in Menorah,  the Oxford Jewish Congregation’s quarterly magazine, my attention was drawn to the following by Harold Pollins, a longstanding member of the OJC:  “There is no mystery about his wife’s name in 1851 being Matilda.  She was the first wife of Lewis Solomon, Matilda Levi, and they were married  on 10 November 1847.  She died in childbirth on 11 May 1851, the child survived and was named Matilda after her.  Lewis Solomon married Diana Kauffman within weeks of Matilda’s death, in the late summer of 1851.”   It appears therefore that in spite of the discrepancy in the ages given for Lewis, this 1851 entry is his.   Harold also wrote about Lewis Solomon in an earlier edition of Menorah,  (issue 168, summer 2003  http://www.jewishgen.org/jcr-uk/Community/oxford_articles/Levi_Solomon.htm ) and his details are available on www.jewishgen.org in their 1851 Anglo-Jewish Database.

Harold’s copy of Matilda’s Death Certificate issued on 11th May 1851 is shown below and reveals she died of puerperal sepsis, also known as Childbirth Fever some days after the delivery of her infant, wjho was then named Matilda in her memory.

A search for a marriage of Lewis Solomon in the years 1850-53 finds one Lewis marrying a Diana Kauffman in the third quarter of 1851 in St James, Westminster. A copy of the Marriage Certificate reveals that it took place at the Western Synagogue in London on September 3rd 1851, and that Diana’s father’s profession is given as Watch and Clock Maker. 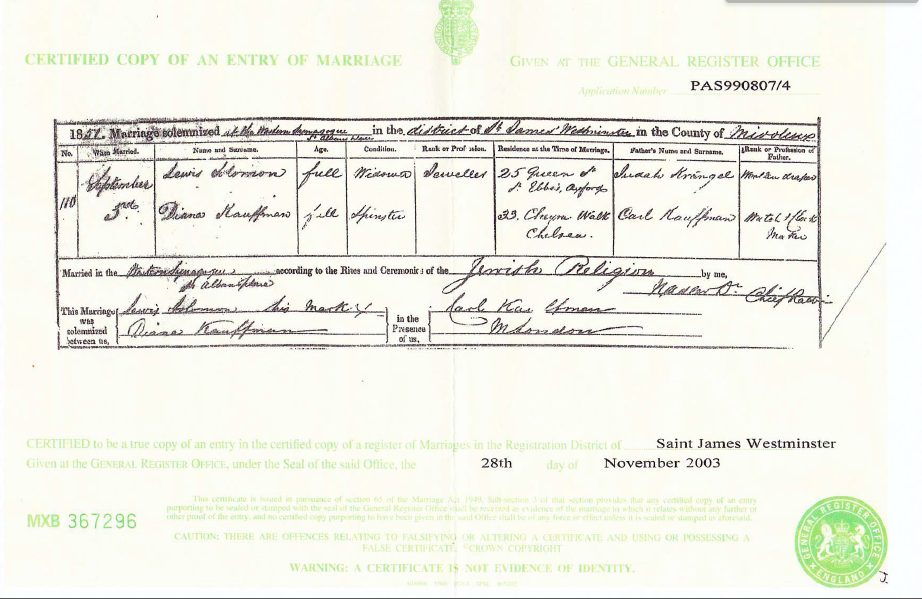