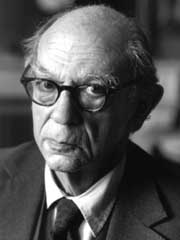 Sir Isaiah Berlin was a Russian-British philosopher and historian of ideas, regarded as one of the leading thinkers of the twentieth century, and as the dominant liberal scholar of his generation.

He excelled as an essayist, conversationalist and raconteur; and as a brilliant lecturer who improvised, rapidly and spontaneously, richly allusive and coherently structured material.

Berlin was born as an only child into a wealthy Jewish family, the son of Mendel Berlin, a timber industrialist and direct descendant of Israel ben Eliezer, and his wife Marie, née Volshonok.    He spent his childhood in Riga (then part of the Russian Empire; now capital of Latvia), and later lived in Andreapol´ (a small timber town near Pskov, effectively owned by the family business) and Saint Petersburg, witnessing both the February and October Revolutions of 1917.

Feeling increasingly oppressed by life under Bolshevik rule, the family left Saint Petersburg on October 5, 1920, for Riga, but encounters with anti-Semitism and difficulties with the Latvian authorities convinced them to leave, and they moved to Britain in early 1921 (Mendel in January, Isaiah and Marie at the beginning of February), when Berlin was eleven.   In London, the family first stayed in Surbiton, then within the year they bought a house in South Kensington, and later Hampstead.   His English was virtually nonexistent at first, but he became fluent within a year.   He was educated at St Paul’s School (London), then at Corpus Christi College, Oxford, where he studied Greats (Classics).   In his finals examinations, he obtained the highest grades in Oxford University, winning The John Locke Prize for his performance in the philosophy papers, in which he outscored even A.J. Ayer.    He subsequently took another degree at Oxford in PPE (Philosophy, Politics and Economics), obtaining a first-class degree after less than a year on the course. He was made a tutor of philosophy at New College, Oxford, but, before the end of the 1932 at the age of 23, was elected to a prize fellowship at All Souls College, Oxford.

From 1957 to 1967, he was Chichele Professor of Social and Political Theory at the University of Oxford.   He was president of the Aristotelian Society from 1963 to 1964.    In 1966, he helped to found Wolfson College, Oxford, and became its first President.    He was knighted in 1957, and was awarded the Order of Merit in 1971.   He was President of the British Academy from 1974 to 1978.    He also received the 1979 Jerusalem Prize for his writings on individual freedom.    The annual Isaiah Berlin Lectures are held at both Oxford and the British Academy each summer.    Berlin’s work on liberal theory has had a lasting influence.

Above short extract from Wikipepedia