Share on facebook
Share on twitter
Born in the mid 17C – died 17th July 1699.
Hebraist and book collector was born in Spain, brother of the celebrated Jacob Abendana, the distinguished Spanish physician and Haham, was taken at an early age to Hamburg, Germany where he completed rabbinical studies and then Leyden, Holland where he studied medicine. Isaac and his brother Jacob Abendana clubbed together to produce Hebrew books for the Christian market, and they thereby became acquainted with some of the most eminent Christian Hebraists of the day. Having been approached by Adam Boreel-who with John Durie and Samuel Hartlib in England hoped to persuade a learned Jew to translate the Mishnah, the Hebraic core of the Talmud, into Latin, Isaac Abendana arrived in Oxford on 3 June 1662 and presented himself to Edward Pococke and other prominent Hebraists there.

Yet it was John Lightfoot, Christian Hebraist at Cambridge, who secured an academic position for Abendana, and from 1663 until 1667 he was on the payroll of Trinity College, Cambridge, working on his translation of the Mishnah.    From the books of the senior bursar of Trinity College  one “Abendana the Jew” (presumably Isaac) received from the college £6 per annum during the years 1664-66.   He taught Hebrew and Rabbinic to any one who might engage to pay for his services, but he was not in any sense the incumbent of a chair at the university. The retaining fees paid by Trinity College and the payments from private pupils do not appear to have provided sufficient funds for him, as in 1671 he made a Latin translation of the whole Mishnah, which he sold to the university.    He seems to have left Trinity in less than friendly circumstances, possibly because his bookselling came to overwhelm his scholarly duties, but by 1669 he was once again with a proper position, this time as an employee of the university itself.    By the time of his final payment in 1676 Isaac Abendana had completed translating the Mishnah into Latin, nearly thirty years after the project first began to be discussed in the Hartlib circle, although his labours were never published.

Accordingly Abendana left Cambridge and moved to Oxford, spending much of the period between 1681 and 1685 in London, where his brother Jacob was leader of the Sephardi community. In Oxford he stood in high favor with the president of Hertford College, to whom he dedicated the Jewish calendars published in 1695, 1696, and later. Besides these calendars and the Latin translation of the Mishnah (which manuscript is in the Cambridge Library and consists of six large quarto volumes), Abendana wrote a comprehensive work entitled “Discourses on the Ecclesiastical and Civil Polity of the Jews” (1706). This work is an elaboration of the essays already commenced in the calendars. Like his brother, he entered into correspondence with several of the Christian savants of his time; and there are extant two letters addressed to Buxtorf the younger, in Hebrew and Latin respectively.   [Source: Jewishencyclopedia.com, first published 1901-06] 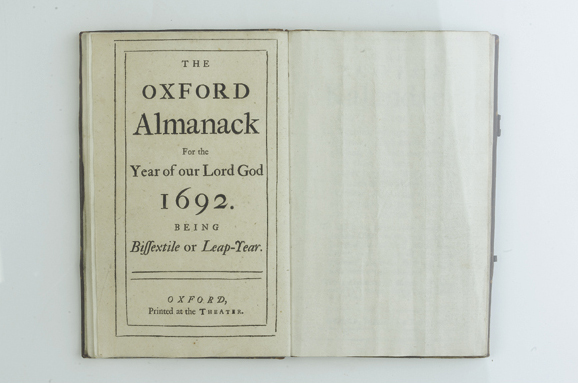 Oxford Almanack 1692
16pp
Printed at Oxford ‘at the theatre’.
By I. Abendana, concluding with an explanation of the Jewish calendar. 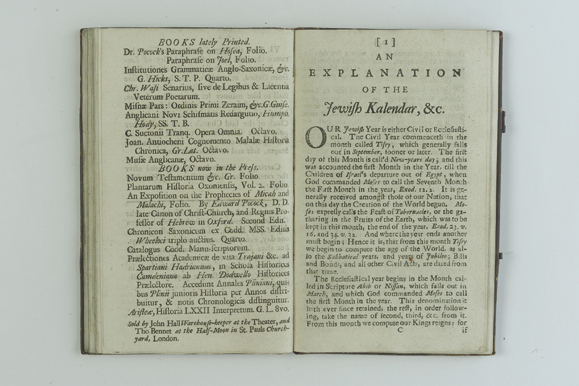 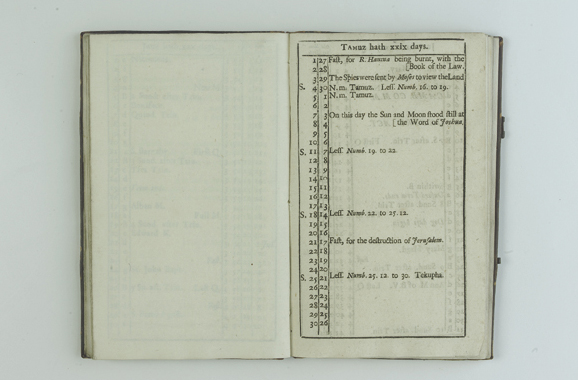 From 1689 Isaac served as lecturer in Hebrew at Magdalen College, Oxford, a position he held until his death ten years later. During his Oxford years Isaac Abendana became known as a resident authority on all matters Jewish and as the chief purveyor of Hebrew books, a situation he consolidated by inventing the Oxford diary, which in his original form included not only information relevant to university men but also a yearly essay on some aspect of Jewish religion and culture. These essays made the almanacs widely sought after even when their immediate practical use had passed, and they were later published in book form.   A copy of “An almanack for the year of Christ, 1694” printed ‘at the Theater, Oxford in  the year 1693’ meaning the Sheldonean is shown to be held at the British Library, and also in Corpus and Queens Colleges Oxford and was previously owned by Richard Blechynden, master of Gloucester Hall and first provost of Worcester College from 1714–1736 (in 1714, Gloucester Hall was transformed into Worcester College). 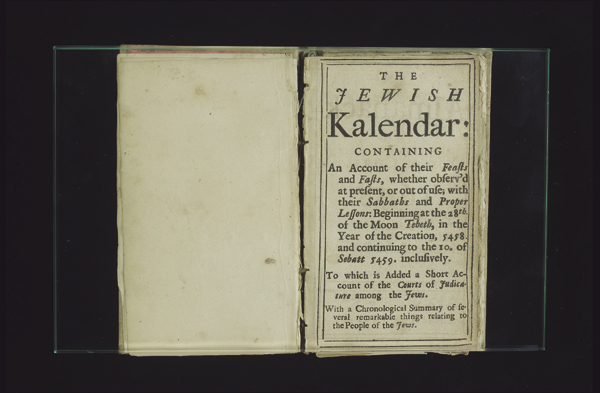 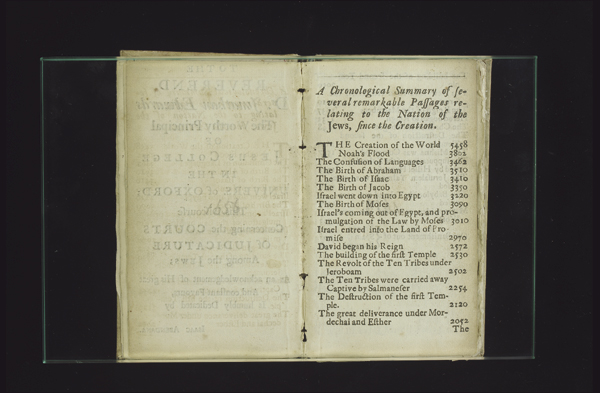 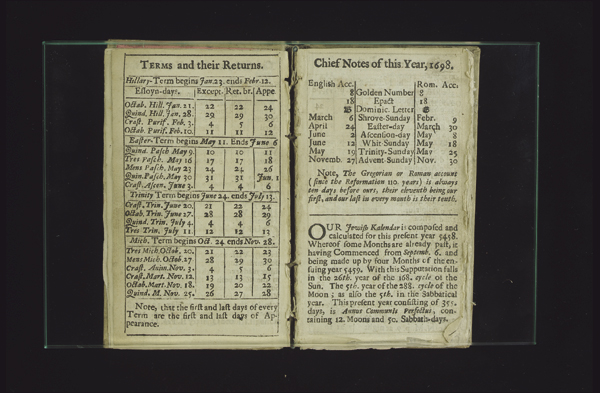 The Inventory of Oxford Hebraica and Judaica shows a payment to Dr Abendana by  Jesus College.

Isaac Abendana died on 17 July 1699 while visiting his friend Arthur Charlett, master of University College, Oxford, who informed the antiquary Thomas Tanner that ‘Old Abendana rising at 4 to see me, having lighted his Pipe, fell down dead’  (Katz, ‘The Abendana brothers’, 46). A merchant Jew passing through the town conveyed Abendana’s body to London for burial, putting an end to a thirty-seven-year Oxbridge career, during which time he had a virtual monopoly on Hebrew studies at the two universities.

Modified from the work of David S. Katz, Vivienne Larminie, and The Catologue of the Jewish Museum, London
Images ©Jewish Museum London.