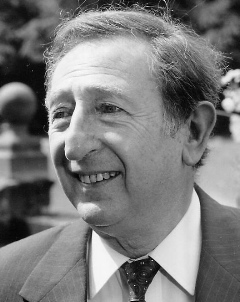 Professor David Patterson CBE, scholar of Modern Hebrew literature and educator, born Liverpool 10th June 1922, died Oxford, 10th December 2005. Born in Liverpool on 10th June 1922, David Patterson was drawn in his late teens into the Zionist youth organisation Habonim. The idealism of Habonim, which counted then among its members many talented young people who later made their mark in the newly founded State of Israel, profoundly influenced his outlook on life. He harboured dreams of emigrating to Palestine to join a Kibbutz, and to this end trained at a Habonim owned farm at Latton near Cirencester. He chose to study Hebrew and Arabic at the University of Manchester because he thought these languages would be useful for life on a Kibbutz. The choice of Manchester was no accident. In 1945 Manchester University had been the first in Britain to introduce Modern Hebrew as a degree subject (a bold move given that many Semitists of the day looked down their noses at this strange new form of Hebrew), and the city had long been a centre of Zionism, with a Habonim House in which Patterson became a leading light.

After graduating from Manchester in 1949 with a first in Semitic Languages, he was appointed principal of the new Habonim Institute in Manchester, set up to train youth leaders. It was through this Institute that he met José Lovestone, whom he married in November 1950. The two of them emigrated to Israel in April 1951. After a short period trying to become a real, pioneering kibbutznik at Kfar Ha-Nasi – clearing stones from the fields, tending the carp in the fish-ponds, and, disastrously, doing the communal cooking (a duty from which he was ‘voted off’!) – Patterson found a more appropriate outlet for his energies in teaching, first at the Beit Sefer Reali in Haifa and then at the Midrasha Le-Morim (Teachers’ Training College) of Ihud Ha-Kibbutzim in Jerusalem.

In 1953 he returned to Manchester to take up the newly created Lectureship in Modern Hebrew at the University. A year later he was appointed (simultaneously) to a lectureship at the Institute of Jewish Studies at Manchester, which the great refugee scholar and rabbi, Alexander Altmann, had set up. The Institute, which offered courses and lectures in Jewish Studies to the general public, was independent of the University, but its faculty included some outstanding scholars. It may have been a source of inspiration for the Oxford Centre that Patterson was later to found.

In 1956 Patterson succeeded Chaim Rabin as Cowley Lecturer in Post-Biblical Hebrew at Oxford, a post he held for thirty-three years. His achievements at Oxford were immense. He entrenched the study of Modern Hebrew Language and Literature in the curriculum of the Oriental Faculty. In 1965 he became a founding Fellow of St Cross College, and, thanks to private sponsorship that he raised, established a Visiting Fellowship for Hebrew writers linked to the college. The first five holders of the post were Aaron Appelfeld, Amos Oz, Dalia Ravikowitz, Yehoshua Kenaz, and A.B. Yehoshua, all virtually unknown at the time, but later to become luminaries of Modern Hebrew literature. In 1972 he founded the Oxford Centre for Postgraduate Hebrew Studies. The name was carefully chosen to allay the suspicions of a rather conservative University establishment not altogether comfortable with innovation (no one could object to the study of Hebrew, a subject which went back at Oxford at least to Henry VIII’s time), but it misleadingly suggested an emphasis on language, and in 1993 it was changed to The Oxford Centre for Hebrew and Jewish Studies, to reflect more accurately the range of subjects pursued under its aegis.

The Centre was attached to St Cross College, and was officially recognized by the University of Oxford. The University was happy to accept the teaching the Centre’s fellows provided for its students but refused to pay anything towards the Centre’s costs. These had to be met by private donations, which imposed on Patterson the strain of perpetual fund-raising. The Centre, which began in a small way ‘in one room at the Oriental Institute’, as Patterson himself never tired to saying, grew under his leadership into one of the largest research institutes for Jewish Studies outside Israel. As it expanded it first rented from St John’s a fine Georgian town house at 45 St Giles in the centre of Oxford. Then, thanks to the generosity of the Charles Wolfson Charitable Trust and a very substantial private donation, it was able to acquire the beautiful Yarnton estate near Oxford to accommodate its administration, its growing library, its visiting fellows and, finally, its diploma students. Patterson retired as President in 1992, but remained actively fundraising till his death, searching for the elusive endowment that would secure his Centre’s future in perpetuity.

But it was David’s sense of fun of mischief and of humour that made the process of learning so exciting and so exhilarating. And it was this, and his scholarship that enabled so many people to benefit from what he had set up at the Centre. If David could leave one message about the Centre, I suspect he would quote from the Pirkei Avot “lo aleha hamelacha ligmor velo ata ben-chorin lehitbatel mimenah”- You are not obliged to complete the task but neither are you free to give it up. He has created a legacy in providing a Jewish intellectual and cultural centre in Oxford. David was extremely astute at academic politics. He knew instinctively when to go forward or when to hold his ground and such qualities coupled with his vision and devotion made him an ideal Institute builder. Many agreed with his vision but few actually thought that it would really happen. In this David showed once again the passion necessary in order to achieve dreams. Ben Gurion said in another context “in order to be a realist you have to believe in miracles”. David certainly seemed to bring about a number of miracles in founding and sustaining the Oxford Centre for Hebrew and Jewish Studies and he always had a remarkable and special affection for ALL the staff at the centre.

David Patterson was a scholarly leader. Both his public and private life related to the same person. The warmth and genuine affection that he showed to all his friends and colleagues, and his kindness and sensitivity together with his humour made David an exceptional man – who was liked by almost everyone. Isaiah Berlin said of David that “I know of no man who combines intellectual and personal honesty, kindness, professional integrity, a great deal of common sense, administrative skills and what I can only describe as goodness of heart to an equal degree”. There is a saying in the Pirkei Avot, kol shruah habriot nocha heymanu, ruah hamakom nocha heymenu – when a person’s fellow creatures delight in him, God too takes delight in him.

David was an outstanding translator and because he was also a connoisseur of the English Language and understood all the nuances – this led to wonderful interpretations. Significant amongst these was Moshe Shamir’s historical novel, Melekh Basar Vedam -The King of Flesh and Blood, which was first published in 1958, and is considered to be a landmark. In this book, Moshe Shamir writes about the Maccabean era while attempting to create language that would be reminiscent of post-biblical Hebrew. What a tremendous and exacting challenge for the translator. David explained that he could find no stratum in English which could reflect the specific quality of the post-biblical Hebrew, which is one of the novel’s main characteristics. David in recognising this difficulty nevertheless produced a brilliant translation – a mark of his outstanding scholarship.

In the midst of his labours to promote Jewish Studies, he somehow found time for research. He leaves behind him a scholarly œuvre of eight monographs and volumes of translation, and more than sixty articles. His first love was the early modern Hebrew writers. His studies of Abraham Mapu (1964) and of The Hebrew Novel in Czarist Russia (1964; 2nd ed. 1999) have become classic introductions to this literature, which was written in an experimental Hebrew dating from the time when the language was being revived for non-religious purposes, and in a state of flux. His ability to translate these difficult works into readable English, which conveys something of their quirky power, was uncanny.

The focus of his own researches as well as his upbringing showed him the values of Yiddish as a language and convinced him of the need to resurrect Yiddish within the ambit of modern Jewish studies. He was able to establish teaching fellowships in Yiddish in that most traditional and change resistant University, Oxford, an initiative that was imitated by conservative and substantial universities elsewhere.

DP, as he was fondly known, received numerous honours and awards including a Rockefeller Foundation Award (1959) National Brotherhood Award (1978), a Fellowship of the American Jewish Academy of Arts and Sciences, the Stiller Prize in Jewish Literature (1988) and honorary doctorates of the Hebrew Union College and Baltimore Hebrew University (1988). He has held several visiting professorships and has been to Australia twice as advisor to the Australian Academy of the Humanities.

David Patterson, who died on 10th December 2005, played a key role in the remarkable emergence of Jewish Studies as an autonomous and vibrant academic discipline in Britain in the late 20th century. His ‘services to Jewish Studies’ were publicly recognized by the award of a CBE in 2003. He is survived by José, four children and seven grandchildren.

Based upon the obituaries written by Prof Philip Alexander and Prof Alan Crown of Sydney, and the Eulogy given by Prof Raymond Dwek, Oxford in Wolvercote Cemetery, Oxford