The Oxfordshire Jewish Heritage Committee is reviewing the presence of Blue Plaques which commemorate places or people with a Jewish connection. To have a Plaque erected application is made to the Oxfordshire Blue Plaques Board who have set the following criteria which must be strictly adhered to:

Criteria for a person to be remembered:

* He/she must have been dead for at least 20 years or have passed the centenary of his/her birth, whichever is earlier.

* He/she must have resided or worked for at least five years in the building on which the plaque will be erected.

OR has made a significant contribution to human welfare or happiness

OR has done work worthy of recognition.

Criteria for a location to be remembered:

The location must be recognised nationally, countywide, or locally, as being of especial significance and worthy of recognition. Where an event is associated with it, at least 20 years must have elapsed before it can be considered for commemoration.

So far only 4 Blue Plaques in Oxford can be shown to have a Jewish connection: That for Sir Isaiah Berlin, was erected after the involvement of the Oxford Jewish Heritage Committee, and this is demonstrated by the committee’s name appearing on the plaque.  We hope this will be the first of many such plaques around Oxford. 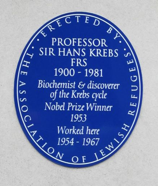 The latest is actually two plaques, one unveiled at the Sir William Dunn School of Pathology and the other in the Radcliffe Observatory Quarter.   The isolation and purification of penicillin to treat bacterial disease was mainly done by Howard Florey, Ernst Chain, and Norman Heatley, at the Dunn School from 1938 to 1941, the clinical trials were carried out in the Radcliffe Infirmary.    A report on the BBC website can be seen here The plaque, funded by the Oxford Civic Society, was unveiled at 10 Belbroughton Road, Oxford on 10 December 2003 by Sir Martin Wood.   An account of Sir Francis’ achievements and life canbe read here 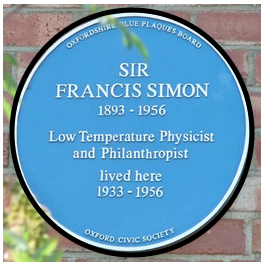 Franz Eugen Simon was born into a wealthy Jewish merchant family in Berlin in 1893.He was appointed to the Chair of Physical Chemistry at Breslau in 1931 and by now was regarded internationally as the outstanding low temperature physicist of his generation. After Hitler came to power he was at first exempt from persecution because he had been awarded the Iron Cross (first class) for his service on the Western Front in the First World War, but he wisely accepted Lindemann’s invitation to join the academic community in Oxford.